Lajos Kassák (1887–1967) was a Hungarian poet, novelist, painter, essayist, editor, and theoretician of the avant-garde. Chronology Based on the panel at permanent exhibition in the Kassák Museum, Budapest; there compiled from biographical text by Ferenc Csaplár. 1887: Born in Érsekújvár, Austria-Hungary. 1900: Leaves school for apprenticeship as locksmith. 1904: Moves to Budapest and starts working in factories in Angyalföld and Újpest. Participates in trades union political campaigns and joins Hungarian Social Democratic Party. 1908: First poem published in the weekly Újpest. 1909: Sets out for Western Europe on foot, with no money. Discovers art in the museums. Returns to Budapest in December. 1915: Founds anti-militarist periodical A Tett [The Action]. 1916: The international issue of A Tett appears with contributions from writers and artists from countries at war with the monarchy, and the periodical is banned. Launches a new periodical MA [Today]. 1919: During Hungarian Soviet Republic enters into dispute with Commissar Bela Kun over avant-garde art and the independence of art from politics. MA subsequently prevented from appearing. After the failure of the Soviet Republic spends five months in prison. 1920: After his release, leaves the country for exile in Vienna. Relaunches MA, formulates the theoretical basis of Hungarian constructivism and develops wide contacts with European avant-garde movements. 1926: Returns to Hungary and starts up new journal, Dokumentum [Document] which lasts for one year. 1928: Launches a new, independent, left-wing journal Munka [Work] and associated movement. 1928-34: Leader of a socially-aware educational society of students and workers, grouped around Munka. Writes regularly for the newspapers Népszava [People's Voice] and Szocializmus [Socialism], protesting against Stalinist tyranny and extreme right-wing movements. 1939: Exhibits in the Galerie Charpentier, Paris. A new law restricting press freedom closes down Munka. 1940-45: Publishes several novels, books of reports and books of verse. In 1940, an anti-war poem causes him to be imprisoned for two months under a 1937 court judgement. 1945: After the war takes on several positions in cultural affairs in the new political climate. Edits the relaunched Új Idők [New Times] and then the Alkotás [Art] and Kortárs [The Contemporary]. 1948: His journals are closed down, he is excluded from public affairs, and his poems and articles cannot be published. 1956: Stands up for the Revolution, returns to artistic affairs. 1957: Public involvement limited, but his old writing begins to be republished. 1960: Exhibition of his work in the Galerie Denise René in Paris, resumption of his international career. Still ignored as an artist in Hungary. 1965: Awarded Kossuth Prize for his poetry. 1967: Holds the last exhibition in his life in the Adolf Fényes Room in Budapest, at his own expense. Source : www.monoskop.org 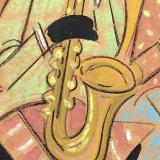