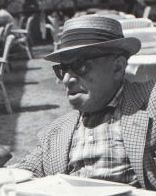 Marcel Vertès (born Marcell Vértes), was born on August 10, 1895 in Budapest, Hungary. His first commercially successful works of art were sketches of corpses, criminals and prostitutes he did for a sensationalist magazine in Budapest. He then did illustrations for many of the clandestinely printed publications opposing the Hapsburg monarchy at the end of WWI.

After the war he moved from his native Hungary to Vienna, Austria and then to Paris, where he was a student at the Academy Julian, living and working in the famous Latin Quarter. Vertes quickly established himself as a regular in the Paris art scene and his work became lighter and more lyrical. In Paris he concentrated on illustration, painting and printmaking, especially lithography. In 1935 he made his first trip to New York to make contacts. Two years later he had his first one-man show in New York.

At the end of WWII he returned to New York with his wife, escaping the Nazi invasion of Paris by two days. He then began to divide his time between New York and Paris. Ten years later, he returned to his beloved Paris and spent the remaining years of his life there.

While in the United States he became a consultant to the Producers and Set Designers of the 1952 Award Winning film Moulin Rouge, about the life and times of artist Henri De Toulouse-Lautrec (1864-1901). He won two Academy Awards for ‘Best Art Direction’ and ‘Best Costume Design’. Interestingly, Marcel Vertès originally earned his tuition money for his European education by making forgeries of Lautrec's works. As such, his expertise was exhibited in the film when his hand is used as the hand of Toulouse Lautrec as he drew, and his images were accordingly used in the film and given appropriate credit in the trailer to the film. Vertes also appeared in the British production credits as Color Production Designer, and Costume Designer for the film, with Schiaparalli (the same of Paris, and Italy). They both jointly won the British Academy Film award in 1952 for Best Costume Design for Moulin Rouge.

Vertès is also responsible for the original murals in the Café Carlyle in the Carlyle Hotel in New York City and for those in the Peacock Alley in the Waldorf Astoria Hotel, also in New York. He designed all the sets for Ringling Bros.-Barnum & Bailey Circus’ entire show in 1956, was an illustration contributor for Vogue and Harper's Bazaar and a member of the jury at the Cannes Film Festival in 1961. He was made an officer of the Legion of Honor in 1955, when he designed for ballets at the Paris Opera.

Vertès was a member of the American Art League, and under the sponsorship of the American Federation of Arts his work traveled to museums across the country in a celebrity portrait exhibition, "As They Were".