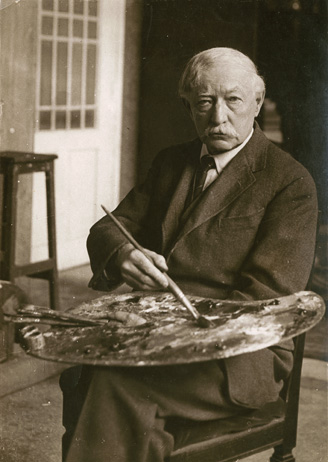 He was a student of Bertalan Székely and Károly Lotz in the School of Decorative Art in Budapest in 1882-1884. He studied art at Hackl in the Munich Academy, then at the Julian Academy in Paris. He was particularly influenced by Bastien Lapage and Dagnan-Bouveret. Later he returned to Munich and joined Hollósy's group of artists. His pictures painted in the 1890s reflected naturalistic tendencies of Bastien-Lapage ("The Sword of the Commander-in-Chief", 1880, "Devotion", 1891). He joined Károly Ferenczy's plein air group of the Nagybánya school in his Nagybánya period in 1896-1909. He became a major teacher at the Nagybánya Free School founded in 1902. His years in Nagybánya represent his most important period in art ("Drying Clothes", 1902, "The Three Magi", 1903). He was awarded with the Fraknói-prize in 1904. He was the leader of the Kecskemét art school in 1911-1918. His decorative and stylizing period was over by about 1915. In his landscapes of the Great Plain, he again turned to a realistic approach ("Sweep-Pole Well", 1924). Later he painted pictures with movement typical of baroque, then simple and realistic ones. In his later years, his still-lives and pictures on gypsies were of less significance. Major pictures: "Spring is Awakening", "Toilette", and "Gypsies".